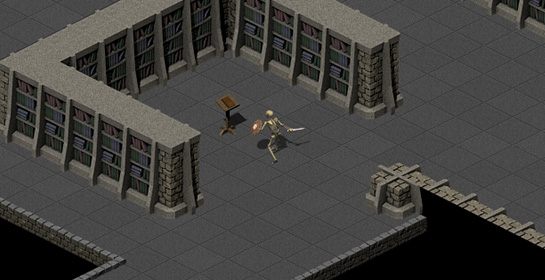 In my last post I showed the conversion of Tonypa’s isometric tutorial to AS3 Starling. With that under my belt it was time to build my own isometric engine and see what Starling could handle. I will go into some detail on the various choices I made, but for now, here’s what I managed to achieve:

If you are looking at the tiles thinking you have seen them before, you would be right! The tiles and map are from Flare by Clint Bellanger. This project has since been split into the Flare Engine and the Flare Game. After seeing this awesome project it seemed crazy to reinvent the wheel and it gave me the perfect opportunity to focus on the Starling side of things.

By using the Flare maps I had a complete map with collision data, layers, tile images, all ready to go. Also one of the biggest and coolest features is that they are built in Tiled. Which basically means by using this map system you have your very own map editor for all your isometric levels!

Flare maps are setup with 3 layers; collision, object and background. Similar to the tutorial conversion in my last post, the background layer is on the bottom. The object layer becomes the foreground layer. Collision becomes a new addition, and a great one at that. With all collision data being in this layer, the art is now seperated. A great improvement on tying the art to collision. See below for the setup in Tiled: 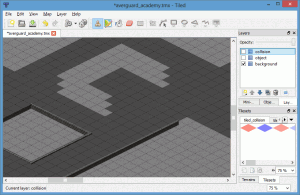 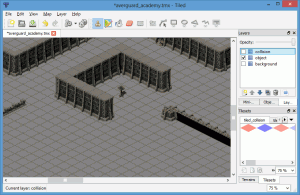 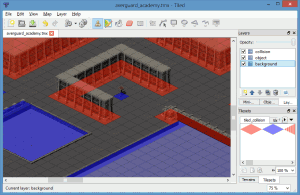 One very cool feature in Tiled is layer compression. There are a few options but I stuck with Base64 (zlib compressed). This converts your array of tile numbers to a compressed string. For the Flare map I used this reduced the filesize from 47KB to 6KB. As another example it took the background layer from 16384 characters to just 2008 characters! If you are still not convinced see one row of the map below.

For the demo at the top of this post I used 2 tilesets. One for the background/foreground tiles and one for the skeleton. These could have been compressed more with a licensed version of Texture Packer or similar. Software like this makes use of every pixel in your spritesheet! Thanks to Flare engine, see the spritesheets I used in the demo: 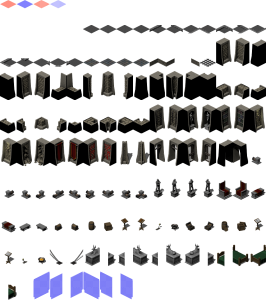 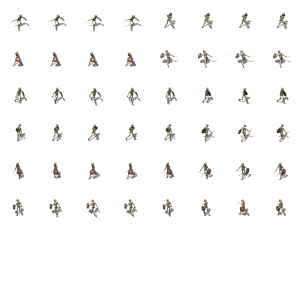 Flare maps are made at 70×100 tiles. This was the perfect testbed for my demo. At that size it is large enough to prove whether Starling is a viable isometric solution or not. See below for a zoomed out view of the map used in the demo.

Getting a Tiled map into Flash

This is actually a very easy process. You simply embed your TMX map file and parse as necessary. It is just XML! I found some great TMX parsing libraries which do the leg work for you. In the end I found them a bit bloated though and made my own cut down version. Here are two libraries for reference, Tmx-parser and as3-tiled-reader. If you are interested in this approach, they would be a great start.

At the moment this map is just scratching the surface of Tiled. You can add as many layers and tilesets as you want. There is also objects and object layers built in. With these you can setup enemy layers and pass variables into your engine! Tiled is really a one stop shop for map setup.

A whole bunch of tweaks and tricks went in to getting the best performance I could in the demo. I will go into some detail below.

To avoid any awkward stuttering in the display I loaded all necessary textures at map load and stored them in a Vector. This means I didn’t need to create any new Textures during gameplay. Often new object creation or garbage collection is the cause of jerky frames.

Another great object creation/detroying avoidance tool is an Image pool. For the demo I created 500 images in an Image pool for re-use. Anytime I needed a new tile image, I would take an image from the pool and assign a texture from the Vector above. This meant there was no new object creation during this process. As you can imagine, when scrolling around a level continuously this is a big saver! Basic usage shown below. There is plenty of information on this topic so I won’t go further into this.

Checking hundreds of Sprites/Images at 60 frames per second for position and changing their depth can be an expensive operation. Luckily, I learnt about layers from the tutorial conversion. By seperating the background tiles out I now only have to depth sort the foreground tiles. This more than halves the number of Images needed to depth sort. You can even tweak it a bit more by not sorting depths every frame. If you work out the distance your player/enemies can travel, your frame rate, when a tile row/column is swapped out, you can get the optimal number of times you NEED to depth sort.

For demo purposes I just needed collision at a tile level for the player. So I set about finding a solution that references the collision array. At first this seemed very easy, but you quickly realise that you need to check a rectangle, rather than just a point. I’m not sure if my solution is the best, but it got the job done. It works by getting the direction the player is travelling and checking the two points that can collide with the collision array. I will walk you through an example:

The player is heading right/east

And the buzz kill for this type of collision… you need to do it for all angles you allow your character to move. In the demo case, this was four. If you wanted eight way movement you would have to allow for that.

Well if you are still reading you probably deserve a beer about now! I hope you have learnt a thing or two from my experiments with isometric Starling. Go forth and prosper!

As you can imagine I got very excited at the possibilities of this demo. Below is a list of things I wanted to add:

I did go ahead and add the teleport, that’s a given. But after some further investigation I really needed an entity framework or gaming framework to achieve what I wanted. It was quickly becoming cumbersome adding pick ups, switches, etc, without a way to tie it all together. If I had the time I would most likely build on top of StarlingPunk or something similar. Ash would be another good option. Unfortunately I have just moved country and don’t have the time right now. Though I am happy to have completed this series of blog posts before 2014!

I quick shout out to influences throughout this project. Thanks for your code

Murdoch is a Designer/Developer who has worked at global agencies Ogilvy and Wunderman. He has worked on big name clients that include Coke, Microsoft, Xbox, Nokia, Mercedes, Nissan, Jaguar, IBM, Shell, BP and GSK.

Tips, tricks and ranting on design and development.